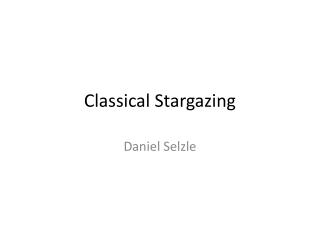 Chapter 3: Classical Realism By Richard Ned Lebow - Learning objectives. after this lecture you should be able to:

Classical Music - . 1750-1825. what was happening in the world? . cultural movement modeled after classical antiquity

Classical Conditioning - . using a stimulus to modify behavior. pavlov is the psychologist associated with classical