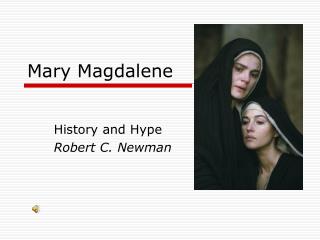 Mary Magdalene. History and Hype Robert C. Newman. Mary Magdalene. A great deal of interest recently… … much of this spawned by Dan Brown's Da Vinci Code. Was Mary really married to Jesus? Did they have a child which united the two royal families of Israel?

MARY MOTHER OF JESUS, MOTHER OF GOD - . part iic: mary’s motherhood. “who am i that the mother of my lord should come

Matthew 28:1- 6 - 1 after the sabbath, at dawn on the first day of the week, mary magdalene and the other mary went to

Half-hanged mary - . what’s the story?. she married poor, and her and her husband only grew poorer with the years. she

What Can We Know about Mary Magdalene? - . her name. disciple and supporter of

Mary - . mary is the mother of jesus. she was marred to st. joseph. mary’s cousin was st. elizabeth, who was the mother

Jesus appears to Mary Magdalene - . when jesus was suffering on the cross , some women stood by his side: st. mary (his

Mary Magdalene and the Da Vinci Code - . we are witnessing the degradation of morality and the introduction of all manner

Mary, Mother of Jesus - . deuteronomy 5:16. &quot;honor your father and your mother, as the lord your god has