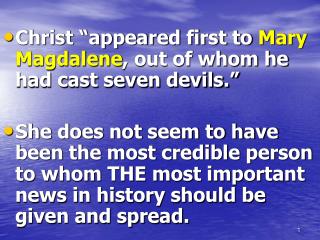 Christ “appeared first to Mary Magdalene , out of whom he had cast seven devils.” She does not seem to have been the most credible person to whom THE most important news in history should be given and spread. Which of these Bond villains appeared first: May Day, Mr. Big or Kronsteen? - . rob meli, sales manager, emea region, and

The Black Snake - . b y mary oliver. mary oliver . “i don’t think i have ever been bored one day in my life.” mary

This cartoon by a British artist appeared in Punch on 19 February 1919.   - The caption read: german criminal to

ST. ANTHONY Mary CLARET - . the man who challenged the impossible. anthony mary claret. works a great deal , but he is

SALESIANOPOLY - . people #1. title given to the protector of every student that enters a salesian school mary, help of

Splinting and Casting for the Busy Clinician - Objectives. place an appropriate short arm cast and splint.place a