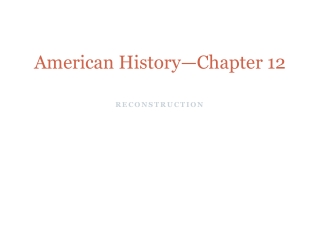 Chapter 7: Growth and Division American History - . the era of good feeling. due to nationalism and only one party

American History Chapter 24-4 - . the home front. history’s voices “not all of us can have the privilege of fighting

History Alive Notes Chapter 7 - . american colonies declared independence in 1776 … but they had to fight a long hard