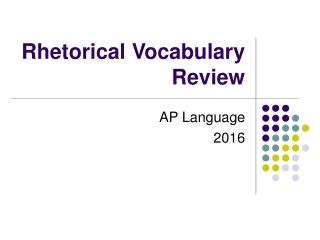 Rhetorical Vocabulary Review. AP Language 2016. “If she tried, he’d argue and wheedle and sulk and bully and plain wear her down.” (~ The Glass Castle , page 76). DEFINITION: The deliberate use of many conjunctions between phrases, clauses, or words. POLYSYNDETON. “Body Ritual Among the Nacirema ” Rhetorical Analysis Essay - . how to approach it. you may print this or download it

Rhetorical Strategies &amp; Notes - . “rhetoric is the art of ruling the minds of men” —plato . review:

Vocabulary Review - . grab 20 flashcards pull out your vocabulary book make flashcards using the words on the next

A Vocabulary Review Activity - . setup directions:. type a vocabulary word on each of the following 10 slides in the