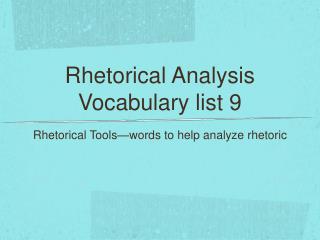 Rhetorical Analysis Vocabulary list 9. Rhetorical Tools—words to help analyze rhetoric. Litotes. A type of understatement where a statement is made by negating its opposite. EX: “Not bad!” = Good “He’s not as handsome as he once was.” = He doesn’t look good now. Asyndenton. The Process of Rhetorical Analysis - . identify the rhetorical situation. select strategies from the text. analyze the