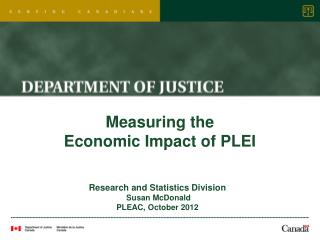 Measuring the Economic Impact of PLEI Measuring the Economic Impact of PLEI. Research and Statistics Division Susan McDonald PLEAC, October 2012. The Department of Justice as Funder. The Department provides annual funding in each province to 1 organization whose designation is recommended by the province.

Measuring the Economic Impact of PLEI

Measuring Output and Productivity Growth in Services - . joint product of nesdb and world bank work being down by by a

Measuring a Nation’s Income - . chapter 5. learning objectives. describe the origins of macroeconomics and the problems

EQUIPMENT USED IN DRESSMAKING - . tools are classified according to the function they perform. six functions are:.

Unit 4: A World Divided and United? - . how stable was the post-world war ii era?. was the post wwii era a period of

NATIONAL INCOME - . macroeconomics topic 1. what is national income?. ni is the value of all goods and services produced

Economic Theory - . an economic theory is a set of ideas about the economy that has been organized in a logical