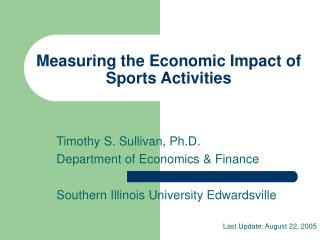 Measuring the Economy - . goal 9.01 identifying the phases of the business cycle and the economic indicators used to

Economic Geography - . economic activities. economic geography deals with how people earn a living and use resources and

Measuring the Nation’s Economic Output - . the measure of what a nation produces is in many ways a measure of its