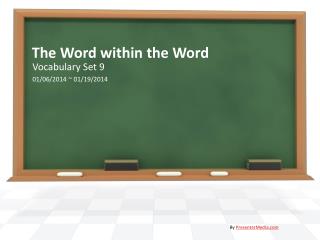 The Word within the Word. Vocabulary Set 9 01/06/2014 ~ 01/19/2014. By PresenterMedia.com. ante. before. Examples of words that include ante : ante bellum: adj. existing before a particular war The antebellum mansion was renovated after the Civil War.

15. WORD PROCESSING - . a word processor is a program that you can use to create various types of documents. it has tools

Word Choice - . word meaning: connotation and denotation. intelligent. divide your page in to half by drawing a line down

What would you say? - . paul”s last letter ever written and 20% of the letter focusses on the importance of the word of

What would you say? - . paul’s last letter ever written and 20% of the letter focusses on the importance of the word of

Word Processing - . basic microsoft word (part i). questions. how do you access the file menu in word 2007? name 3 word

Word Play - . using pictures to play with language. word play. can you guess what each of the following pictures stand

STRESS OF THE SYLLABLEs within the words AND STRESS of the WORD s within the SENTENCE s - . ms el-hendi. spoken language:

The root word in the word dictionary is Tion Dict Ary Ion - 2. what does the word dictator mean in the following

The Word Within the Word - Do you know