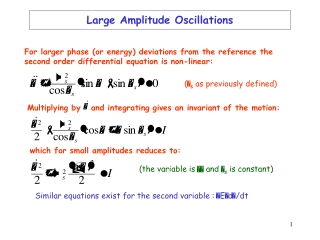 Large Amplitude Oscillations. For larger phase (or energy) deviations from the reference the second order differential equation is non-linear:. (  s as previously defined). Multiplying by and integrating gives an invariant of the motion:. which for small amplitudes reduces to:. Amplitude - . d istance measurement of the maximum displacement of a particle from the resting position (equilibrium) for

Amplitude - . measure of the magnitude of the oscillation. how great the increase and decrease in air pressure produced

Oscillations - An oscillation is a repetitive to-and-fro movement. there are two types of vibration: free and forced. .

Oscillations - . how many initial conditions are required to fully determine the general solution to a 2nd order linear

Amplitude Modulation - . wei li weili@ieee.org. content. what is modulation amplitude modulation (am) demodulation of am