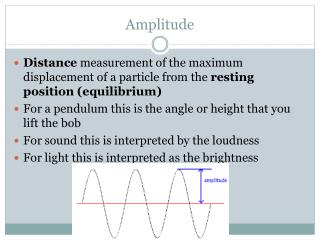 Amplitude. D istance measurement of the maximum displacement of a particle from the resting position (equilibrium) For a pendulum this is the angle or height that you lift the bob For sound this is interpreted by the loudness For light this is interpreted as the brightness. Crest and Trough. Amplitude - . measure of the magnitude of the oscillation. how great the increase and decrease in air pressure produced

Amplitude Modulation - . wei li weili@ieee.org. content. what is modulation amplitude modulation (am) demodulation of am

AMPLITUDE MODULATION - . defining am a carrier frequency whose amplitude is varied in proportion to the instantaneous

AMPLITUDE MODULATION - . amplitude modulation is the process in which amplitude of the high frequency carrier wave is