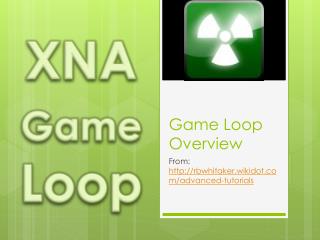 XNA Game Loop. Game Loop Overview. From: http :// rbwhitaker.wikidot.com/advanced-tutorials. The Game Loop. When building a game from scratch, one thing that you need in your game's architecture is something called the game loop .