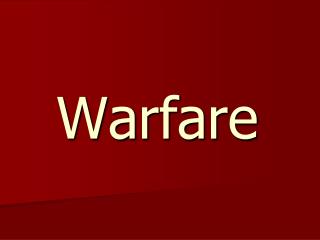 Warfare. Warm Up. On a new page in your notebooks, create the KWL Chart about Medieval Knights and fill in the “Know” and “Want to Know” sections. You have 5 minutes to complete this activity. Directions. Trench Warfare - . trench warfare. the canadian government wanted to encourage men to enlist for war. they said the war

Spiritual Warfare - Gaining victory in a season of warfare. spiritual warfare. understanding our enemy. what are demons?

Modern Warfare - . mr. place. evolution of the battlefield. strategy . strategy, a word of military origin, refers to a

Gas Warfare - . gas warfare:. aims : identify the types of gas used during world war one, examine the effectiveness of

Trench Warfare - . trench warfare – type of fighting during world war i in which both sides dug trenches protected by