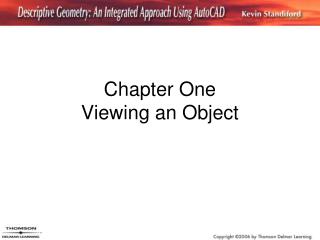 Chapter One Viewing an Object Chapter One Viewing an Object . Objectives. Upon completion of this chapter the student will be able to: Define descriptive geometry. Define the following terms: projection planes, projection lines, and line-of-sight.

Chapter One Viewing an Object

Chapter 12 Object-Oriented Design - . chapter goals. to learn about the software life cycle to learn how to discover new

Chapter 11: The Object-Oriented Approach to Design: Use Case Realization - . systems analysis and design in a changing

Chapter 3: Stress and Disease - . by comprehending that human beings are energy, one can begin to comprehend new ways of