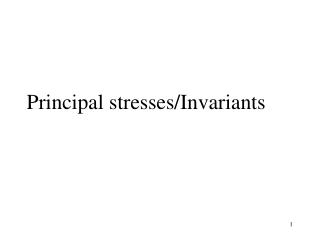 Principal stresses/Invariants. In many real situations, some of the components of the stress tensor (Eqn. 4-1) are zero. E.g., Tensile test What Gets Monitored Is What Gets Done!!! Sue Szachowicz Principal, Brockton High School - Senior advisor, international