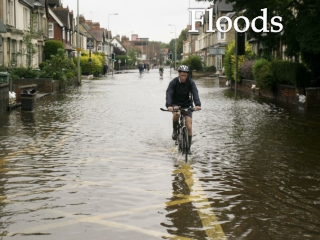 FLOODS, FLASH FLOODS - . flash floods and floods are the #1 cause of deaths associated with thunderstorms...more than 140

Floods - . by alexa jain quinn petty emma kay white owen wilder nicholas cheves. what is a flood?. a flood is a lot of

Floods - . modified by the office of preparedness. floods. defined: any time a body of water rises to cover what is

Floods - . by : codie mullins. facts about floods. six inches of fast flowing water will knock you off your feet. four

Floods - . a certain surface is affected by them for an indeterminated period of time. they can be seasonal or sudden.

FLOODS - Chapter 3: section 3. floods. causes. floods occur when so much water pours into a stream or river that it

Floods - . cert basic training hazards. when floods occur. any time a body of water rises to cover what is usually dry

Floods - . javen and alex and

FLOODS - . a flood  is an overflow of water that submerges land . the european union (eu) floods directive defines

Floods - . by : john http://www.elcivics.com/images/flood-car.jpg. what is a flood?. a flood is an overflow of water that

Floods - . by: brittany whitener shepard. what is flooding?. flooding is were a creek, river, sea, etc. rises and

Floods - . by caitlin, lily, nicola, sam and richard. how does a flood