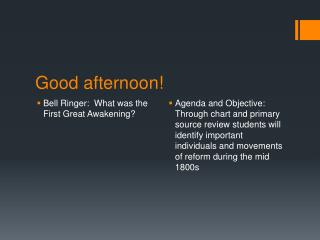 Good afternoon!. Bell Ringer: What was the First Great Awakening?. Agenda and Objective: Through chart and primary source review students will identify important individuals and movements of reform during the mid 1800s. Note Review Chapter 15: Society , Culture, and Reform 1820-1860. Review…. Construction Liens April 14, 2004 Afternoon Session - . the more things change, the more they are the same. (plus ç a