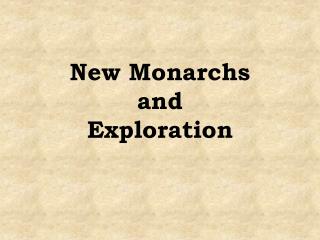 New Monarchs and Exploration. Characteristics of the New Monarchies. Guarantee law and order Hereditary monarchy is the most legitimate form of public power . Tolerated no resistance Support of the urban middle class Final decline of local power of feudal nobles The New Monarchs - . objectives:. you will be able to identify how the new monarchs embodied the ideas of roman

The New Monarchs - . chapter 13 part 7. the new monarchs. many of basic institutions of the modern state were created

Centralization of Power and the New Monarchs - . european politics in the 15 th and 16 th centuries. growth of central

Monarchs and More - . inquiry based activities for pusd students. milkweed- the monarch larvae’s sole sustenance. “a

Monarchs and Dictators - . rise to

Monarchs - . chapter 14 section 2 in your notes. mary i. main focus throughout reign was to strengthen england’s

Renaissance Diplomacy and the New Monarchs, 1400-1559 - . trends and developments. background and characteristics. growth

English Monarchs - . 66 monarchs kings and queens of england and britain. saxon kings. egbert was the first monarch to