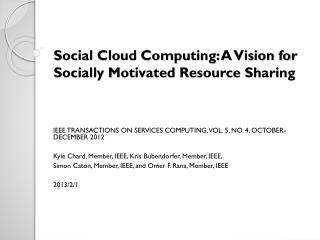 Semantic Web - . social semantic web. where are we?. agenda. motivation from web to web 2.0: technical solution and

Siegfried at a glance - . overview. commitment of some 850 employees first choice in compliance, responsiveness and

Forward in Excellence - . somers central school district. why an update for the 21 st century classroom? . purpose.

Revisiting Ethnographic Study in the era of ubiquitous computing - . neo-ethnography. outline. introduction to

Socio-Rational Secret Sharing as a New Direction in Rational Cryptography - . secret sharing in a multidisciplinary

Information Technology in Organizations: Theory as Metaphor - . sundeep sahay. the use of a metaphor: ”this man is

PV213 Enterprise Information Systems in Practice 0 7 – Architecture of the EIS in the cloud - . cloud computing