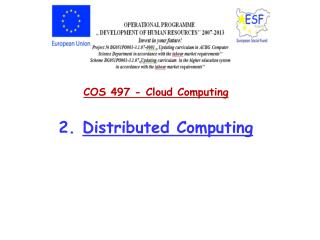 COS 497 - Cloud Computing 2. Distributed Computing. The operation of the Cloud lies in the parallel/distributed computing paradigm. Next s lides give an overview of this mode of computing. Reference : https://computing.llnl.gov/tutorials/parallel_comp /. First, some jargon …

Learning in the Cloud! Cloud Computing for Teachers & Schools - Find resources at