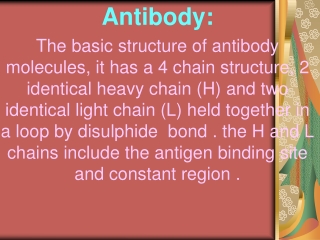 Antibody: The basic structure of antibody molecules, it has a 4 chain structure, 2 identical heavy chain (H) and two identical light chain (L) held together in a loop by disulphide bond . the H and L chains include the antigen binding site and constant region.