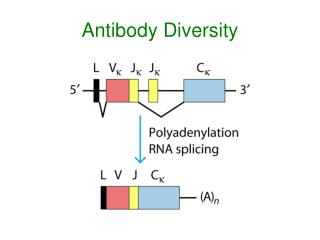 Immunoglobulins - . generation of diversity. introduction. immunologist estimate that each person has the ability to

ANTIBODY - . babitha elias. definition antibodies are substances which are formed in the serum or tissue fluids in

Lecture 5 Antibody genes I - . problem of the generation of diversity v(d)j recombination surface immunoglobulin b