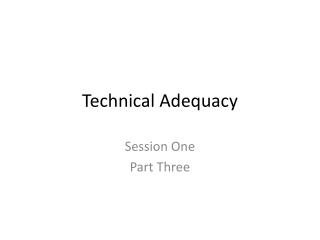 Technical Adequacy. Session One Part Three . Reliability. We all have friends, some are reliable and some are not With your partner, discuss what a reliable friend is, List three qualities you would use?. Reliability. Criteria of Adequacy - . testability scope fruitfulness conservatism simplicity. what are their significance? testability