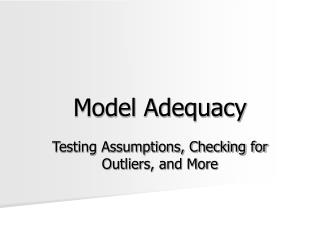 Model Adequacy. Testing Assumptions, Checking for Outliers, and More. Normal distribution of residuals. Our normality assumption applies to the residuals One can simply save them and plot a density curve/histogram

Technical Adequacy - . session one part three . reliability. we all have friends, some are reliable and some are not with