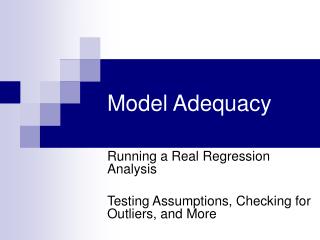 Model Adequacy. Running a Real Regression Analysis Testing Assumptions, Checking for Outliers, and More. Hold up. Before the data was collected, did you bother to do a power analysis to estimate the sample size needed?

Technical Adequacy - . session one part three . reliability. we all have friends, some are reliable and some are not with