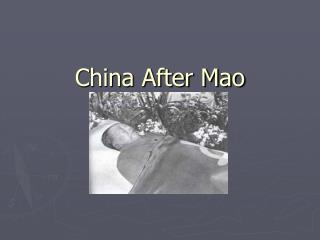 CHINA AFTER MAO - . essential question : how did china evolve in the years after mao zedong’s death?. mao zedong was

China After Mao - . mr. ornstein willow canyon high school ib history. answer???. “it does not matter if the cat is

MAO AND CHINA - . prescribed subject 2 - the emergence and development of the people’s republic of china (prc), 1946 to

China Under Mao - . essential question: how did life in china change under mao’s rule?. mao set about building a

Mao and china - . chapter 14, section 3 collapse of imperial rule!. what was the role of foreigners in china circa 1900?.