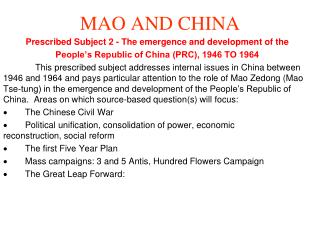 MAO AND CHINA. Prescribed Subject 2 - The emergence and development of the People’s Republic of China (PRC), 1946 TO 1964

Mao Zedong and the Chinese Revolution - . republic of china. the qing dynasty was over thrown by chinese nationalist in