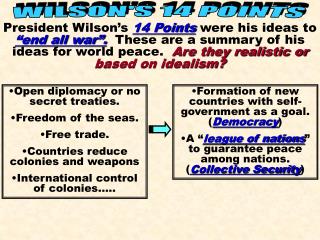 WILSON'S 14 POINTS. President Wilson’s 14 Points were his ideas to “end all war”. These are a summary of his ideas for world peace. Are they realistic or based on idealism?. Open diplomacy or no secret treaties. Freedom of the seas. Free trade. Countries reduce colonies and weapons

257) What was Wilson’s goal when developing his 14 points? Peace and Stability in Europe - 258) what gave the us

Woodrow Wilson, His 14 Points and the League of Nations - . as wwi drew to a close…. president woodrow wilson called

Treaty of Versailles/ 14 Points - . part 1. essential question : what were the major provisions of wilson’s 14 points

Wilson’s Peace Plan - . how one man’s plan for peace wasn’t enough to secure it!. peace without victory. many,

The Fourteen Points - . created by us president woodrow wilson in january 1918 a list of his terms for ending this and

Wilson’s 14 Points - . an overview. the points you need to know. point 1 – no more secret agreements point 4 –

End of the War - . the fourteen points for peace the treaty of versailles a return to “normalcy”. wilson’s 14