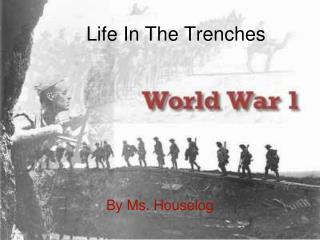 Life In The Trenches. By Ms. Houselog. Death. Many men died on their first day in the trenches as a consequence of a precisely aimed sniper's bullet. It has been estimated that up to one third of Allied casualties on the Western Front actually occurred in the trenches. Trenches - The horror of a stalemate. trenches. trench warfare. people were enthusiastic, optimistic and light-hearted

Trench Warfare During WWI - . the western front. the western area of fighting in wwi. trenches. a ditch protected by

In the Trenches - . world war i. page 4-5. how would you feel being the first person out of the trench? what about the

Trench Warfare - . schlieffen plan 5 weeks to paris 1 week to russia, because it would take them 6 weeks to prepare

In the Trenches - . rules of the game preliminary design draft. team. studio. game and contact info. game name : in the

ATM: A view from the trenches - . introduction. laura grill: l-grill@nwu.edu *my* experience with atm cisco environment

TRENCH WARFARE - . life in the trenches. by: janice, katie, &amp; alie this powerpoint was produced by three jmss