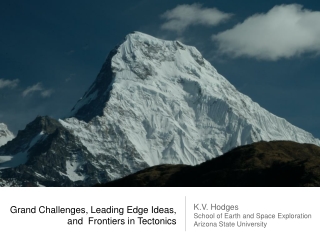 How do geological processes and climate change affect evolution? - . it is by the ff. tectonic plates movements. volcanic

Climates of the Earth - . climograph. graph that indicates average temperature and precipitation for a place. line graph

An Introduction to Soils and Soil Terminology - . soil: some definitions. soil can be defined as the solid material on

Climate - . chapter 14.1. what is climate?. climatology = the study of earth’s climate and the factors that affect

Climate Regions - . tropical. tropical rain forest climate:. hot and wet through the year. usually found on or near the

SOIL GEOMORPHOLOGY (coined by Ruhe , 1974) - . “the study of soils and their use in evaluating landform evolution and

CLIMATE - . chapter 14. 14.1 what is climate?. climatology. climatology is the study of earth’s climate and the

Landmark landform / geomorphic summary of an area - Still the reigning best graphical models for a a region. ( adapted

CLOSED FLOW GEOMORPHIC SYSTEMS - . landscapes with wetlands often have a closed, non-integrated stream system, or at