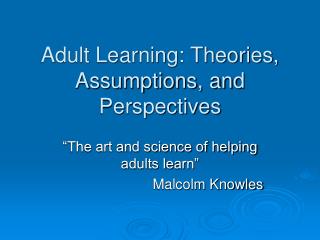 LEARNING THEORIES - . activity - instructions. following these instructions are some slides. when you see the slide, say

Jack Mezirow Transformative Learning Theory - . wife named edee son who is a captain of a charter sport-fishing boat in

Jack Mezirow’s Stages of Transformative Learning - . joe milford walden university 2014. who i am:. my name is joseph

Misconceptions of Teaching the Adult Learner - . mark jurczak edu643.90. what is the adult

Andragogy and the Principles of Adult Learning

Behavioral Learning Theory - . behaviorism as a theory was primarily developed by b.f.skinner . descriptive summary of

Learning Chapter 8 - . introduction. this lecture will: explain the importance of learning in organizations give a

Adult Learning - . an overview of the theories. jean marrapodi summer 2002 ed828. what is unique about adult learners?.