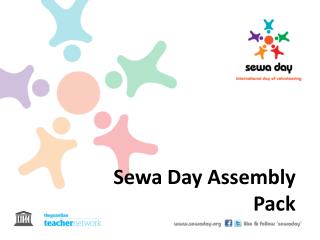 Sewa Day Assembly Pack. What is SEWA?. An act of kindness without expectation. What are we asking you to do?. To spare one day in which you give up your time to make a difference to someone or something. Nelson Mandela. Who is Nelson Mandela?. Nelson Mandela was born in PRESENTATION ON SEWA DAY - . presentation made by rahul sharma. what is the meaning of

Remembrance Day Assembly - . monday, 9 november 2009. listen to this... this is great. this song was written by mrs

Earth Day Assembly 2014 - . presented by the student council. arts, crafts, poems, and games. you can do it, too!. what

Sewa Bharti Malwa - Sewa bharti was founded in the year of 1989. the organization had resolved to work for the welfare of