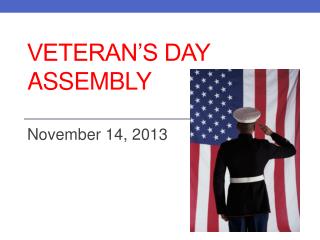 Veteran’s Day Assembly. November 14, 2013. Flag Ceremony – Boy Scouts. "I pledge allegiance to the flag of the United States of America, and to the republic for which it stands, one nation under God, indivisible, with liberty and justice for all.". VETERAN BENEFITS HOW THEY WORK AND WHAT’S NEW FOR THIS YEAR - . presented by: cathy kedski director of financial aid

Veteran’s Day - . get started go to my website, click on blog, let me know why veteran’s day is important go to my

Veteran’s Luncheon - . aberdeen proving ground will celebrate armed forces week 14-19 may 2012 please join us as we

Veterans Day - . vocabulary. patriot veteran why would we want to honor and celebrate these people?. veterans day.

MILITARY VETERANS - . outline. veterans who have access veterans services veteran adjustment back to the civilian

KS2 assembly - Use the sewa day assembly presenter’s guide pdf to help you personalise and deliver this assembly.