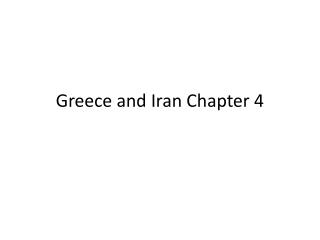 Greece and Iran Chapter 4. Warm Up. Explain in your own words the happenings on September 11, 2001 Why did this happen How does it impact the world around us How is the US viewed by other countries and why Why is it important to remember this event every year

Chapter 9 – Beginnings (Greece) - . lesson essential question 1 – where are the important features and cities of the

The Real Iran - . in recent years, the media has damaged iran’s image so badly that when people hear the name of iran,

Iran - . a. the land: iran is a relatively flat desert country in the center, but it is quite hilly in the north and

Where is Greece? - . sunny greece is 1,500 miles from england. itâ€™s capital city is athens it is famous for its

Iran, Iraq, and Afghanistan - . the shahs of iran. 1925-iran’s first shah made many changes to modernize iran many

Where is Iran? - . there….is iran! . where is iran?. iran 's landscape is dominated by rugged mountain ranges that

Iran 2 - . from the revolution to the present. iran’s complex political system. click below for a chart of how the

Iran and Iraq - . the iranian revolution. with mohammad reza (shah) back in power in iran, the united states and other

Greece and Iran Chapter 4 - . warm up. explain in your own words the happenings on september 11, 2001 why did this happen

All About Greece - . where is greece?. greece is located in the balkan peninsula and borders with albania, fyrom,