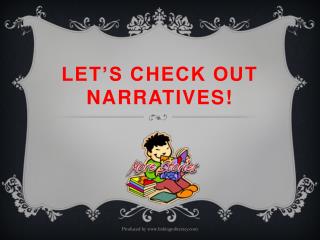 Let’s check out narratives!. So what exactly is a Narrative?. A story A tale An anecdote A yarn A myth A legend An account. Narratives can be. Real life Magical Funny In the past In the future Scary Adventurous In another world. What do they have in common?. An ORIENTATION

Sharing the Narratives of Our Lives: Meaningful Learning with Mobile Devices - Part of the BANKING LAW AND OPERATIONS - . the objective is to familiarize the students with the law and operations of banking. unit