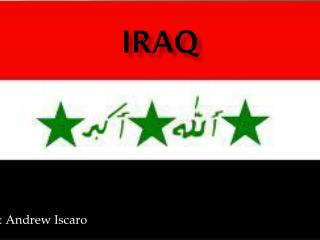 Iraq. By: Andrew Iscaro. Location. Iraq is located in the Middle East, between Iran and Saudi Arabia. Iraq is also bordered by Jordan and Syria to the west, Kuwait to the south, and Turkey to the north. The capital is Baghdad.

Iraq retakes Tikrit - Iraqi troops have driven islamic state out of central tikrit, but the fight to retake all of saddam