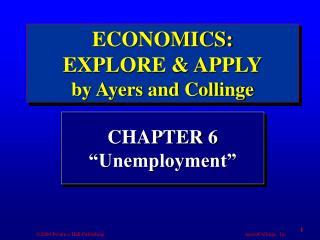 ECONOMICS: EXPLORE & APPLY by Ayers and Collinge. CHAPTER 6 “Unemployment” . Learning Objectives. Identify who is part of the labor force, and who is not. Explain how the unemployment rate is calculated. Elaborate upon unemployment in other countries. The world's jobless - A look at unemployment rates around the

Disability and Unemployment in Trinidad and Tobago - . nicole henry university of the west indies, faculty of social

Home - . divorce. unemployment. sickness. rapture. are you ready?. depression. war. death. a go at your own pace bible