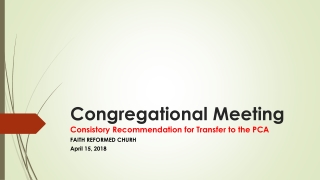 CONGREGATIONAL FELLOWSHIP - . rom 15:25-27. new testament churches are made up of people who are &quot;called unto

Congregational Prayer - . link with previous knowledge: share one hadeeth or ayah of quran about the importance of

CONGREGATIONAL FIRSTFRUITS - . a church that practices firstfruits giving supports individuals who are asked to practice