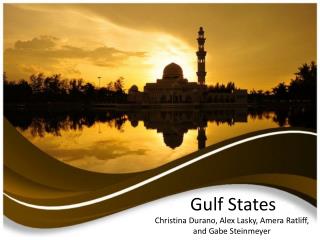 Young people in the Gulf States - . some reflections based on the un’s world programme of action for youth joop

UNITED STATES DEPENDENCE ON PERSIAN GULF OIL - . can we reduce it? john bush may 5, 2006. possible reasons to be

The Macroeconomics of the Arab States of the Gulf - R. espinoza*, g. fayad § and a. prasad # *research department, imf