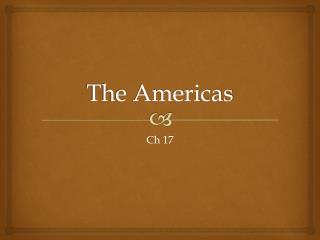 The Americas. Ch 17. I. Introduction. American colonialism and slavery was a result of mercantilism Colonies were to bring gold and resources to homeland Gold was the measure of a countries wealth Monopolistic trade Slaves- “cost-effective labor” Mercantilism brought heavy regulation

Vocabulary for Unit 1 and 2 - . transatlantic triangular trade. trading goods and products across the atlantic between

AP American History Review - . by penny wood based on the american pageant, 13 th edition. 1. name of the mega continent

Chapter 15 - . state building and the search for order in the seventeenth century. social crises, war, and rebellions.

African Slave Trade - . the spanish and portuguese had enslaved africans to work in the sugar plantations on the islands

An Update of Mexican NGL’s - . rodrigo aranda ngl’s trading - pmi. a presentation for: the petrochemical feedstock