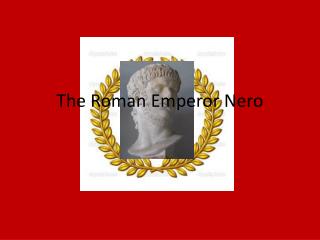 The Roman Emperor Nero. Background. Was born December 15 th 37 AD into the Julio- Claudian Dynasty. Mother was Agrippina the Younger, sister to Emperor Caligula ( Reign: 37 AD to 41 AD) Adopted as stepson to the Emperor Claudius ( His Great Uncle) in 49 AD

The Byzantine Empire: The New Rome - . the division of the roman empire. in 284 ad diocletian became roman emperor. he

TOUR OF ROMAN BRITAIN - . what it looked like!. what to see now!. tour of roman britain. a bit of history

The job of a Roman soldier - . soldier's work in the roman army at the time of emperor hadrian did not just include

The fall of the Roman Empire - . in 64 ce, rome was destroyed by fire. the emperor nero laid blame on christians . this

The Coliseum - Classical roman. originally known as the flavian amphitheater, largest building of the era. construction

The Roman Coliseum - . a power point presentation made by joey niederlander. the flavian amphitheatre. in the center of

Nero’s Domus Aurea - . “at last i can begin to live like a human being”. the emperor nero. portrait bust of nero

There’s A Storm Coming! - . “ the great confusion is almost upon you!”. staged terror attacks in history: nero.

Roman Civil Procedure - . roman civilisation. the city of rome was founded in 753 bc the roman republic was established