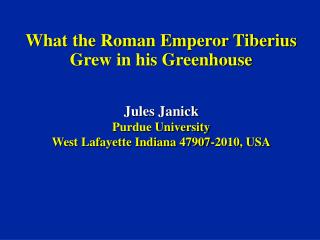 What the Roman Emperor Tiberius Grew in his Greenhouse

What the Roman Emperor Tiberius Grew in his Greenhouse

Greenhouse+ - . entrepreneurship in the history of the european ideas. greenhouse+. god created man – - or maybe vice The Byzantine Empire: The New Rome - . the division of the roman empire. in 284 ad diocletian became roman emperor. he

TOUR OF ROMAN BRITAIN - . what it looked like!. what to see now!. tour of roman britain. a bit of history

The job of a Roman soldier - . soldier's work in the roman army at the time of emperor hadrian did not just include

Rome’ s Military as the Empire grew - . part 2. as roman power grew…. as the empire expanded, it was important that

The Coliseum - Classical roman. originally known as the flavian amphitheater, largest building of the era. construction

The Roman Coliseum - . a power point presentation made by joey niederlander. the flavian amphitheatre. in the center of

starter activity. Study the information about Roman Emperors. You have 2 mins and then your teacher will ask you 5