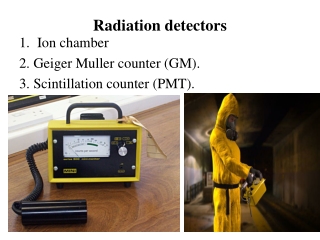 Radiation detectors. Ion chamber 2. Geiger Muller counter (GM). 3. Scintillation counter (PMT). An ion chamber is a general class of detector that makes use of the electron–ion pairs generated by the passage of radiation through a gas to produce an electrical signal. Semiconductor radiation detectors - . best energy resolutions are obtained by these sensors at present the principle is

Transition-Radiation-Detectors (TRD) - . transition-radiation-detectors (trd). how it works transition radiation is

Radiation measurements: detection and detectors - What is a detector? . detector= device which shows a certain effect

Investigation of the properties of diamond radiation detectors - . k. afanaciev, i. emeliantchik, a. ignatenko, e.