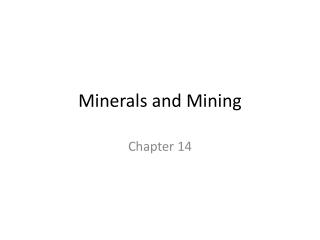 Minerals and Mining. Chapter 14. Minerals & the Environment. Uses Of Minerals. What is a mineral?. Naturally occurring, inorganic solid with a definitive chemical composition and crystalline in structure. Why do we mine minerals?. High-Grade Ores.

Subsurface Mining - . what are mineral

Mining, Ores and Minerals in Finland - . contents. what is being mined? the most important ores and minerals mines and

Mining The extraction of naturally occurring minerals from the Earth - . geography of canada. mining. 1.what do we mine?

Chapter 16: Mining and Mineral Resources - . 16.1 minerals and mineral resource. a. what is a mineral? mineral is a

What is Mining? - . liz larosa 7 th grade science. what is mining?. mining is extracting ore or minerals from the ground

Mining - . mining. mining is the process or industry of obtaining minerals from a mine minerals are the valuable

Strip Mining - . soraya sadeghi, nicole mehdian, dami kim. what is strip mining?. strip mining is the mining of ore or

The Formation, Mining, and use of minerals - . chapter 3 section 3. environments in which minerals form. evaporation salt