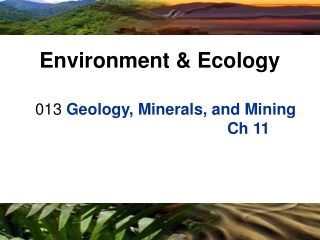 An Introduction to Geology - . minerals are natural compounds formed through geologic processes. they are inorganic

Geology and Nonrenewable Minerals - . chapter 12. section 12-1. what are the earth ’ s major geological processes and

Geology - . sedimentary, igneous and metamorphic rocks contain minerals and are formed by processes that occur within

Mining for Metals - . background information. mining for minerals has been taking place for hundreds of years. these

CAREERS IN MINING - . it’s an exciting time to be involved in the minerals industry. engineer. chemical engineer civil

Mining - . what is it?. looking for ores (minerals with economic value) and metals. types of mining. surface mining: open

Mining The extraction of naturally occurring minerals from the Earth - . geography of canada. mining. 1.what do we mine?