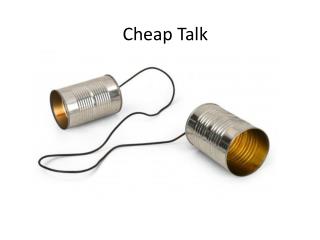 Cheap Talk. When can cheap talk be believed?. We have discussed costly signaling models like educational signaling. In these models, a signal of one’s type is credible if the cost of a signal differs between types and it doesn’t pay to send a false signal. Cheap Talk - . when can cheap talk be believed?. we have discussed costly signaling models like educational signaling. in

Beef or Horse? Cheap talk - . beef or horse?. in a restaurant, some customers prefer beef, some prefer horse. type s

Let’s Talk… Test Talk! - . learning more about the end of grade (eog) tests eq- how can i perform better on tests

TALK-TALK Hand Signs - . an introduction to fingerspelling. february 2012. objectives. you should be able to do these

Talk - The process of asking and answering questions gives you and your child chances to talk together. conversation and

TALK! - . t ell them you care about their safety. a sk them how you can help. l eave something with them. k eep doing it.