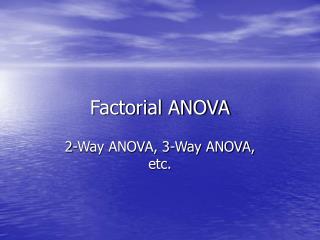 Oneway ANOVA - Analysis of variance is used to test for differences among more than two populations. it can be viewed as

Factorial ANOVA - . 2 or more ivs. questions (1). what are main effects in anova? what are interactions in anova? how do

Two-Way ANOVA - . blocking is used to keep extraneous factors from masking the effects of the treatments you are

Social Statistics: ANOVA - . review. this week. when to use f statstic how to compute and interpret using ftest and fdist