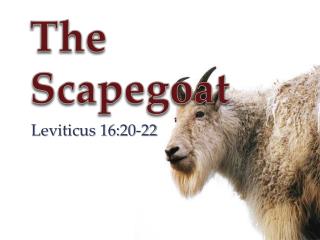 The Holocaust 16-3 - . by jessica,sunny,rachel. anti-semitism. nazis claim aryan (german) race was superior, and everyone

Anti- S emitism - 24:3 holocaust systematic murder of more than 11 people across e urope, more than half of whom were

The Entrance to the Holy Place - . atonement at one moment. the day of

The Pre-Raphaelites and “The Lady of Shalott ” - . note: for best results, play this presentation in conjunction with

Selected Readings from the Bible Lecture S even - . fall 201 3 by: su xiaoxiang. leviticus. the third book of the bible

12 CP Vocab Week 4 - . scapegoat. noun one who bears the blame for an offense “andy was frequently absent, so he was

Warm Up - . suppose boo radley is trying to communicate with someone—perhaps scout or jem. on the inside of the gum

Scapegoat - . definition- someone else who takes the blame for

Holocaust Vocabulary Words - . october 9, 2009. copy the definition of the word and then respond to the question below.