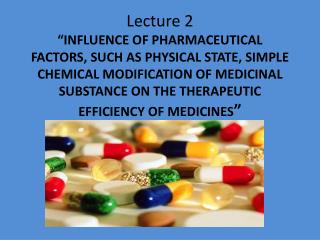 Lecture 2 “Influence of pharmaceutical factors, such as physical state, simple chemical modification of medicinal substance on the therapeutic efficiency of medicines ”. The Development of a Quality Improvement Network for Addiction Therapeutic Communities - Natalie wood and paul goodman.

Chapter 15: Using Therapeutic Modalities - . therapeutic modalities can be an effective adjunct to various techniques of

Therapeutic massage - . objectives. at the end of the lecture students should be able to: define and understand the

CHAPTER - 6 COMBUSTION AND FLAME - . 1) combustible substances :-. substances which burn in air to produce heat and light

Chapter 15: Therapeutic Modalities - . therapeutic modalities can be an effective adjunct to various techniques of

Pharmaceutical Medicinal Chemistry-1 - . dr. bilal al- jaidi. medicinal chemistry. is the science that deals with the