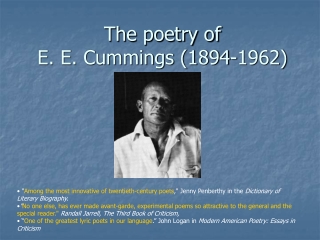 The poetry of E. E. Cummings (1894-1962). " Among the most innovative of twentieth-century poets ," Jenny Penberthy in the Dictionary of Literary Biography. Poetry - . ajarn steve. poetry. poetry is difficult to define. poems use words to paint a picture in your head. a good

Poetry &amp; Song - . english communications 11. what is poetry?. each of you has been given 1 quote about poetry

Poetry - . poetry is not a rose, but the scent of the rose . . . not the sea, but the sound of the sea. eleanor farjeon

Understanding Poetry - . norwood public schools. what is poetry?. in poetry the sound and meaning of words are combined